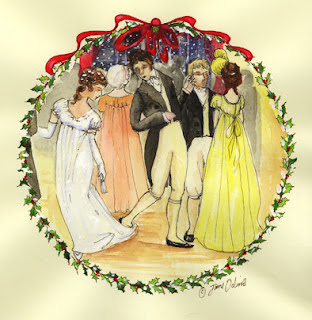 As the tears spilled down her cheeks at the recollection of the scene she had just witnessed, Emma realised in that moment exactly how much she had come to regard Mr. Ellis.
“Foolish, silly woman, I am old enough to know better,” she scolded out loud. Her words splintered like cracked ice on the cold air as she gave herself up to misery. But she must try to be calm. The last thing she wished was to alert the coachman to her distress and Billy or Mary must surely return at any moment.

She forced herself to look out through the carriage window and was relieved to see that the offending room, the scene of the sorry interlude, was no longer visible. Someone had drawn the shutters against the dimming afternoon light and the cold outside. Emma began to wonder if she really had seen such a dreadful sight.
At last! The front door was opening. A blaze of light from the hall cast the emerging figures into darkness but she could see right away that it was not Billy or Mary. In any case, they would be coming from the direction of the tradesmen’s entrance, she told herself. The couple that descended the steps were animated, laughing and completely recognisable. Leticia Calder and Mr. Ellis were sharing an intimate moment. They were arm in arm and as close as it was possible to be. Emma could not bear to look a moment longer. She did not want them to see her and ducked out of sight, only peering out again as she heard voices approaching.

“Are you feeling well, Miss? You look like you’ve seen a ghost!” Mary declared with such a look of concern on her face that Emma felt quite ashamed. “Billy was only going to knock on the front door, so I ‘ad to run and fetch ‘im round the side before the butler got ‘im. Oh, and I’m sorry to tell you, Miss, but Mr Ellis is not at home.” She rummaged up her sleeve and proffered a square of coarse linen. “It ain’t much, but it’s clean.”

Emma had little time for any more reflection. After ten minutes through snowy lanes, the carriage deposited her at the door of Hatton Hall and forced into overlooking her own problems, she was soon greeting her old pupil with exclamations of delight and sympathy at her predicament. Two pleasant hours passed quickly, though she felt a certain alarm when Henrietta reminded her about the ball that was taking place at Wintersmede Hall on the following Saturday.

"It will be quite like past times with all our old friends," Henrietta laughed, "though whether I shall be able to join you all on the dance floor with a swollen ankle is another matter!"
"I am sure you will be much fitter by Saturday," Emma soothed. "In any case, I should like to keep you company if you have to sit and watch." Despite her levity she was troubled. Having forgotten about Bessy’s annual Christmas ball, the thought filled her with dread. Mr. Ellis was sure to be invited.

It was only on her return that Emma allowed herself to dwell on this and earlier events. Why had Mr. Ellis lied? He had been at the house, she had seen him, seen them both. This was beyond everything else. To have taken advantage of her sweet nature was hard enough to bear but now there was irrefutable proof of his duplicity. A headache throbbed at her temples and she quickly excused herself after dinner, to retire to the solace of her room.

The next morning, determined to face the day with a new resolve, to put all thoughts of a certain gentleman and her reticule out of her mind, Emma sat down to breakfast and her post. However, she saw with concern that the handwriting on the first letter she selected, belonged to none other than Miss Calder. The letter pronounced that its writer was sure to give Miss Carstairs the most unexpected surprise. They were to meet sooner than could be imagined, for Bessy had invited her to the ball!

“Is it a letter from Leticia?” asked Bessy. “ I recognise my old schoolfellow’s hand.”
Emma felt hot crimson flush over her cheeks. “Yes, she is very excited about the ball. Leticia hints at other surprises but I must admit I am a little puzzled by it all.”
Bessy and Charles exchanged glances. Perhaps it was her imagination but something seemed to pass between them; Emma thought Bessy looked almost sly.
“I expect she is longing to tell you all about her fiancée,” Bessy said at last, “Leticia has so much to tell you. She is travelling up from London on Saturday morning. I can’t wait to see her!”

Emma did not know what to say. Bessy clearly had no idea that Leticia was already within such close proximity. Whatever she might say on the matter would be certain to be refuted and despite her certainty about what she had witnessed, decided it would be best to keep her counsel. There was a mystery surrounding this whole affair. She could not explain her reticence, but Emma felt unable to question Bessy for fear of appearing impertinent. Quite how she would survive the forthcoming ordeal of a ball, she could not comprehend, but she knew she was about to be tested, as never before.

The ballroom glittered with candlelight and jewels. The hum of chattering voices, the footfall of soft kid shoes pattering across the polished floor, sounds punctuated by merry peals of laughter, announced the expectation of the evening’s entertainment. Emma entered the ballroom escorted by Bessy and her husband. She clutched Charles’s arm tightly as she took in her surroundings, her stomach in knots and her heart hammering. At least there was no immediate sign of Mr. Ellis or Leticia but as she breathed a sigh of relief and started to relax, she felt a tug on the back of her gown. It was evident someone had stepped on and become entangled in the train. Turning, she observed the very person she least wanted to see. For a moment, she was at an utter loss for words as she regarded his blank expression. Anyone would think he did not know her. And then just as she thought she could not be more shocked, her astonishment turned to incredulity. As she stared at the unsmiling figure that appeared to be exactly the image of the Mr. Ellis she knew, a voice on her other side proclaimed it could not be so.

She started and stared, from one man to the other and so great was the shock, so overwhelming the heat that overcame her, that before she could help herself, Emma fainted and fell.

Jane Odiwe
To be continued......
Posted by Historical Romance Author at 12:43 AM

I loved your part, Jane; it's amazing how you took the story in a totally different direction to the one I'd had in mind, but it works just as well.
Fenella

Thank you Fenella, I really enjoyed writing this and I can't wait to read the next part!

Oh well done Jane, what a lovely turn-around in the story!

I love the fact that you can take the story somewhere else-I'm really looking forward to finding out exactly who Emma has bumped into!

I guessed right! (At least, I think I have, depending on the next writer). And I am really loving your illustrations, Jane.

Thanks Jan, I'm dying to know what Wendy is going to write next and to see if her ideas are the same as mine. Having tested this out on my family I was really surprised by their different interpretations.