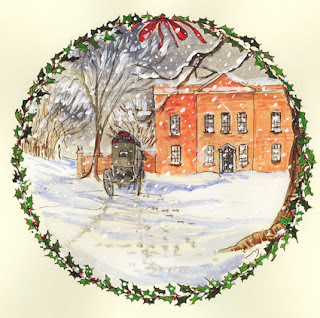 'Allow me to find it for you, Miss Carstairs.' Mr Ellis dropped to his knees and proceeded to rummage in the snow for the missing article. He held it up triumphantly. 'I have it here. A trifle sad but nothing a sojourn by a warm fire won't cure.'
Emma held out her hand for the reticule but he shook his head. 'No, Miss Carstairs, I shall put it in my coat pocket, it's far too wet for you to carry.'
She was beginning to feel cold and miserable, her earlier moment of excitement when Mr Ellis had seemed to stare at her in a particular way was forgotten.
She remembered that he was a dissembler – that he was already betrothed to an ex-pupil of hers and had no right to be paying her such particular attention.
He offered her his arm and she took it; it would seem churlish to refuse when he had filled his top boots with snow on her behalf.

'I wonder who the carriage belonged to, Mr Ellis, I did not know any further guests were expected.'
'Well, you shall no doubt discover the identity of the occupants when you return to Wintersmede, I believe we are almost there. I for one shall be glad to see you back in the warmth the house.'
He escorted her as far as the front steps then doffed his beaver, inadvertently covering her with powdery snow, and promising to see her soon, she watched him stride off down the drive. She wondered why he walked everywhere when he must have a horse he could ride and save himself the bother of wet feet.

She went disconsolately inside, smiling prettily at the elderly butler, and headed for her chamber to remove her sodden garments. She was on the bottom stair when Bessie emerged form the drawing room, her face animated.
'My dear, Miss Carstairs, such excitement, such news, a carriage has come to take you to visit Lord and Lady Fenwick, it seems Henrietta has need of you.'
Puzzled, Emma paused. 'Is there a note for me explaining why I must depart so precipitously?'

'There is, I have it here.' Bessie proffered the square of paper and for a moment Emma thought it might already have been opened. How else did Bessie know so much? 'I wrote to Hetty and told her you were coming to spend Christmas with us here. The driver told Cook why he'd come and he asked for the bricks to be reheated for your journey. It's only a few miles to Hatton Hall, I shall expect you back by evening.'
Emma took the letter and nodded. 'I shall read this upstairs, Bessie, if you would excuse me?'
The chamber-maid assigned for her comfort was waiting with dry garments and a wistful expression. 'Shall you be wanting me to come with you, Miss Carstairs? Madam says I can if you would like me to.'
Emma smiled. 'Yes, of course you can come, I should be glad of the company.'

She opened the note and scanned the contents. It seemed Henrietta was languishing in bed with a broken ankle, a skating accident, and on learning that her dearest teacher was so close, was desperate for a visit.
'I shall be ready to leave as soon as I've changed. I expect to return before dark.'

She explained to her young hostess the purpose of her excursion and was given Bessie's blessing. Emma was pleased to have this as she did not wish to cause offence. It was difficult following the correct etiquette when you were in her invidious position- friend, but not an intimate, certainly not a servant, but not quite one of them. She so longed to have a real home of her own, to be someone else, not merely a spinster of eight and twenty, liked but mostly overlooked in company.

The carriage was well sprung and the horses fresh. Wrapped up as she was in furs, with bricks under her feet, she could not but feel pampered and her momentary dissatisfaction evaporated.
Feeling a tickle at the back of her nose she reached down to find her reticule in which she kept her handkerchief. Too late she recalled that the perfidious Mr Ellis had placed it in his pocket and failed to return it.
'Sarah, could you stand and tap on the roof of the carriage? I wish to speak with the coachman urgently.'
'Yes, miss.' The girl stood up and rapped sharply. The vehicle swayed to a halt and then a small flap in the roof was raised and a friendly face appeared.
'Is there something wrong, Miss Carstairs?'
'There is, Coachman. Mr Ellis has my reticule and I don't wish to proceed without it. Is his uncle's home on our way, by any chance?
'Indeed it is, miss. It's a bit up the road. I'll turn in and send Billy up to the door to ask for it.'
'Thank you. That is most kind.'

The flap shut and the carriage lurched forward. Ten minutes later it shuddered to a standstill again outside a magnificent dwelling, which made Wintermede seem little more than a small manor house by comparison. Emma rubbed the window free of mist and stared avidly. The rooms were lit with candles and she could view the interior of the house quite clearly.
Her heart contracted. She couldn't believe what she was seeing. But her own eyes could not deceive her, unlike the rogue clasping Leticia Calder in his arms and kissing her with a passion she could hardly comprehend.

She sank back on the squabs, unable to hide her distress. Until that moment she had still harboured a hope that Mr Ellis returned her affection, but now she knew him for a liar. She turned her face away from the window, ignoring Mary's anxious enquiry, ignoring the rocking as the boy climbed down to run the errand. However, when it swayed a second time and an icy blast swirled around her, she looked up. Mary had gone. She couldn't depart this wretched place without the girl. Whatever had possessed her to run away?

Fenella Miller
To be continued…………………….
Posted by Historical Romance Author at 7:18 AM

Oh goodness. Curioser and curioser. It seems our little tale is getting woefully tangled - good luck to the next writers - I can't wait to see what they make of this!

And another two day wait! One can see why Dickens sold all those issues...